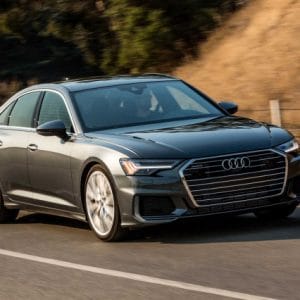 Wagon versions of the 2021 Audi A6 and 2021 Mercedes-Benz E-Class mid-size luxury sedans provide the cargo versatility of an SUV with fold-flat seats but retain the sharper driving characteristics of lower-riding sedans.

If adulthood is all about compromise, then the A6 Allroad and E450 All-Terrain are the happiest compromises to drive. We don’t separately rate each variant of every model, instead, we rate the most popular variant purchased by consumers, which is the sedans. (Read more about how we rate cars.) Despite high relative ratings, the 2021 Mercedes-Benz E-Class outperforms the 2021 Audi A6 with a TCC Rating of 7.8 out of 10 compared to 7.2 for the A6.

That is not the case for the wagons.

The 2021 E450 All-Terrain looks and feels larger, mostly because of its boxier rear end. From the rear doors back, it could pass for a GLE SUV. It’s a fraction of an inch long with a half-inch longer wheelbase, yet it’s the same exact height as the Allroad.

Both wagons have short front overhangs with a chrome strip on the rockers amid black cladding rounding the wheel arches. The rear door of each wagon cuts into the cladding over the rear wheel arches in a way that might upset perfectionists.

The Allroad flows with more European curves and looks more like a raised sedan with its long nose and a roofline that starts to taper off as early as the rear wheel. It rides on 20-inch wheels instead of the 19 inches on the All-Terrain, and it’s more than an inch wider, dramatizing a long and low profile that looks ready to pounce. Unlike Audi sedans, however, it wears the vertically slotted grille adorning Audi’s SUVs.

The design difference plays out in the interior space. Both come with striking contrasts of metallic or wood trim surfaces and soft-touch materials housing plenty of screens. Mercedes’ side-by-side 12.3-inch touchscreen and instrument cluster is more aesthetically coherent than Audi’s stacked screens for infotainment and climate controls. But the A6 comes standard with real leather to better contrast the trim components, whereas Mercedes uses synthetic leather and an overreliance on gloss-black plastics in the centre console.

Recommended!  How to take a screenshot on the Google Pixel 3 [Simplest Way]

The All-Terrain’s blockiness hinders it upfront but avails itself in the rear. Blocky side mirrors and thick A-pillars conspire to limit the visibility of pedestrians or cyclists, and in some cases cars, coming from right to left. But the All-Terrain’s tall boxy tail houses a rear-facing jump seat that can fit two small passengers to bring total occupancy to seven.

In short, the Allroad looks more like a curvy sedan and the All-Terrain looks like a blocky SUV. We prefer the former, though many people prefer the latter.

The Allroad handles more like a sedan, whereas the All-Terrain is more powerful and more efficient. Both come standard with all-wheel drive, an independent front and rear air suspension with adaptive damping, and a 3.0-litre inline turbo-6 with a mild hybrid system. As if the spec similarities weren’t close enough, both engines make 369 pound-feet of torque and both hit 60 mph in 5.1 seconds, according to the respective automaker.

The Allroad makes 335 horsepower and uses a seven-speed dual-clutch automatic that is seamless in higher gears but can be unsure of the driver’s intent in lower gears, especially in Dynamic mode. Small paddle shifters help overcome any indecision.

The standard adaptive air suspension results in 2.4 inches of variability, depending on the six drive modes. At its peak with 7.3-inch ground clearance in Offroad mode, the A6 Allroad rivals some crossover SUVs.

Switch to Dynamic mode, however, and it lowers from the same 5.5-inch clearance as the All-Terrain down to 4.9 inches. The change in throttle sensitivity is significant. Overall, it drives lighter, shiftier than the All-Terrain.

The air suspension in the All-Terrain raises it up nearly an inch at low speeds for off-roading and can be tweaked even higher for crawling. I kept both vehicles on the road, shiny side up, but either of these wagons could go deep into the country or rutting over old mining roads.

The All-Terrain has a more muscular feel coming from its 362-hp engine. The 48-volt mild hybrid system not only recaptures energy when the wagon is coasting, it helps with propulsion by adding up to 21 hp and 184 lb-ft. It makes the automatic stop-start feature unnoticeable and gives a jolt off the line.

Both hybrid systems shut off the engine when coasting into a stop to conserve fuel, but Mercedes wins that duel. The All-Terrain gets an EPA-rated 22 mpg city, 28 highway, 24 combined; the Allroad gets 20/26/22 mpg.

For more performance and more money, check out the AMG E 63 All-Terrain or the RS6 Avant.

At the standard level, the Allroad has the performance edge.

The wagons are more similar than different in these categories as well. The All-Terrain costs $68,650 but without counting options it isn’t as well-equipped as the $66,895 Allroad (prices include destination).

Safety tops the charts in both models, with five-star safety ratings from the NHTSA and at least a Top Safety Pick award from the IIHS. Standard safety features include automatic emergency braking, blind-spot monitors, and parking sensors. Optional equipment ranges from adaptive cruise control that can restart from a stop up to certain speeds to ease the annoyance of traffic jams, and surround-view cameras with all kinds of features.

Mercedes offers augmented video for navigation that projects a front-camera display on the touchscreen overlaid with directions, street names, and street addresses. It’s great at night. Audi’s navigation uses 3D Google Earth, and both feature natural voice recognition for better fidelity. Even though Apple CarPlay and Android Auto come standard on both wagons, the native navigation and voice commands are superior.

The steering wheel controls on the All-Terrain are a new capacitive-touch design that doesn’t work as accurately as the thumb pads on the outgoing steering wheel. Audi’s lower touchscreen for climate controls is fine—albeit far below the line of sight—but I still prefer buttons like in the All-Terrain. To access its various heated and massaging seat options, you have to go through the touchscreen anyway.

The standard leather seats in the Allroad give it an edge and it bundles options better such as the $4,500 Prestige package that includes everything from more advanced driver-assist features to cooled front seats and heated rear seats. Mercedes’ approach is more piecemeal and expensive, though it gives you more choice.

A 4-year/50,000-mile warranty with at least four years of roadside assistance comes with either wagon.

The similarities between the two wagons far outpace the differences, so unfortunately for the pragmatists, it comes down to feeling. I’d take the Allroad for its lighter handling and sexier style.  I’d be happy in either, and much happier than in a similarly priced crossover or sedan.

How Does Bitcoin Mining Work? Mine Bitcoin and Dogecoin with Phone free