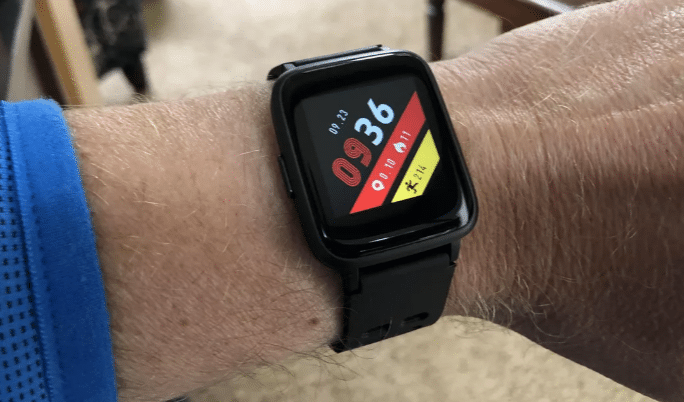 Last year I posed a question. How good could a super-cheap smartwatch possibly be? Verdict: Surprisingly good, if you keep your expectations in check.

See, these watches claim to be jacks of all trades — fitness tracking, heart-rate monitoring and so on — but often prove to be masters of none. And that’s OK, provided they’re effective at some things, which many are. For example, maybe you just want a watch that looks decent, tells time (duh), controls music playback on your phone and notifies you of things like calls, appointments and text messages.

With that in mind, I tried another cheapie wearable — one I found to be surprisingly good in many respects. Here’s the deal, followed by what you need to know: For a limited time, and while supplies last, SmartWear Tech via Amazon has the BingoFit Fitness ID205 smartwatch for $22.54. That’s after applying promo code I4Q7KZV5 at checkout.

A quick note about nomenclature: The ID205 is the manufacturer’s name for this watch, but it’s sold under a number of different brand and model names. Here it’s BingoFit Fitness; last time around it was the Eden, and if you scroll down on the Amazon listing page you’ll see it from several other brands as well. That’s standard practice these days with a lot of Chinese products.

The ID205 looks a lot like the Amazfit Bip, which in turn resembles the Apple Watch. It’s rectangular, with a square embedded 1.3-inch display and a fair amount of plastic bezel surrounding it. It’s not an always-on display like the Bip’s, but it’s also much brighter and sharper. Thankfully, it’s also readable outdoors, unlike some of the cheapies I’ve tried.

The ID205 employs a touchscreen, along with a function button on either side. The left one immediately engages your preferred fitness activity; the right one is a Back button. Other options are all just a swipe away from the watch face, of which there are four to choose from.

Another important consideration: How good could a $23 smartwatch possibly be at heart-rate monitoring? I did a quick, highly unscientific test: One after the other, I measured my resting heart rate using the ID205, Amazfit Bip and Apple Watch. To my surprise, all three were within a beat or two of each other (63 beats per minute on average, if you’re curious). But I wasn’t able to conduct any exercise tests, and here results can definitely vary, especially as a watch moves on your wrist and encounters sweat.

Bottom line: If you buy this expecting an Apple Watch, Samsung Galaxy Watch or the like, you’re going to be disappointed. But if you want basic smartwatch features, solid battery life and an incredibly low price, there’s a good chance you’ll like this very much.

Your thoughts? If you ordered one of these last time out, hit the comments and let your fellow cheapskates know how it’s going!

Previous post These are the Project Athena laptops, Intel hopes will change how you work