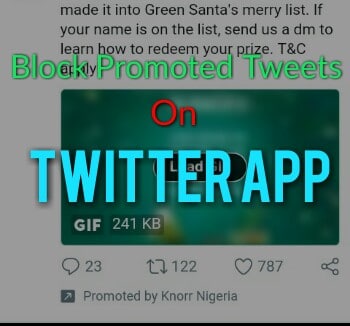 In this post, I’ll discuss four different methods on how you can easily block promotional tweets or sponsored Tweets o Twitter app for iPhone and iPad or any phone.

What are Promoted or Sponsored Tweets?

Promoted tweets are paid advertisement tweets. Though it’s not possible to block all ads in the official Twitter app, you can block accounts that promote tweet, hide specific individual tweets, as well as opt out of personalized ads.

Opting-out of personalized ads won’t remove ads from Twitter, but it will prevent Twitter from collecting data to target you with personalized ads. The only way to block all Twitter ads is to use a third-party app that doesn’t contain ads—but most of those apps are premium.

Search for an alternative app. Tap on any of the third-party Twitter apps to view their features. Many of the apps that don’t contain ads, like Tweetbot, Tweetcaster, cost money but offer really useful features not found in the official Twitter app.

Many of the free apps, like Twitterrific, don’t charge for the app but offer an option to remove ads for a one-time fee.

Consider the star rating of each app as well as the number of reviews listed just below the app’s title.

Recommended!  How To Start A Cocoa Export Business In Kenya And Make Money

Tap Get or the app’s price. This will start the download or ask you to verify your purchase with a fingerprint or passcode.

After the app has finished installing, tap Open to launch the app.

Wrapping Up
These are the ways in which you easily remove, hide, restrict sponsored Tweets or posts from showing on your twitter feed or home.

Previous post Opera News App: This Newly Launched Software Can Save More Than 80% Of Data Usage

How To Start Profitable Poultry Farming In South Africa, Morocco And Egypt

Top 15 Businesses you can start with Low Capital in Kenya, Egypt, Morocco etc