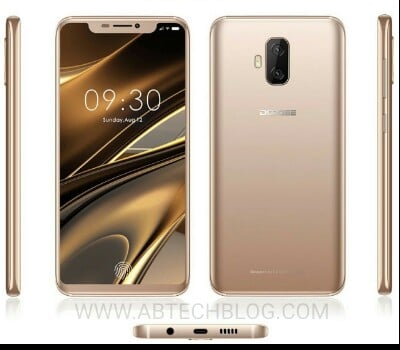 While we were all waiting for Vivo, Doogee has stolen the spotlight with their new smartphone – Doogee V which is just unleashed.

Apparently, Doogee V has rear Samsung’s Galaxy S9, front of the tech giant Apple’s iPhone X and fingerprint reader under the panel. I wonder why they had to add that peculiar iPhone X notch 😵

The body is surrounded by an aluminum chassis while the rear is formed by a slightly curved glass panel on its sides, which collects a dual photographic system located in a vertical arrangement, similar to what we will see on the Samsung Galaxy S9+.

However, you won’t see any physical fingerprint scanner in the back or in the front. This is because Doogee placed the  sensor under the glass of the screen, which confirms that VIVO will also launch a smartphone with a reader under the panel.

For the rest, beyond a 6.2-inch screen surrounded by tiny frames, No other specs have been revealed yet but do check back on this page later. I’ll update the page with the specs once it’s available.

See all the Look here: