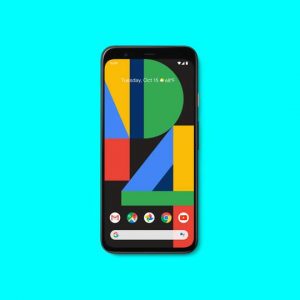 Big phone launches come thick and fast towards the end of each year. And 2019 has been no different. Pretty much the last manufacturer to reveal its flagship devices every year is Google – the Pixel 4 has now arrived.

It’s Google’s fourth in-house phone and, as evolutions go, there are a few potential upgrades. There’s an extra camera, a new radar-based gesture system and Google has killed the notch. But do they add to the phone?

Before we dive into the review, here are the basics: the Pixel 4 comes in two different sizes, a 5.7-inch Pixel 4 and a 6.3-inch Pixel 4XL. Colours? Black, white and orange. It’s also available to buy now.

Other than the physical size and some battery differences, there’s very little that’s different between the 4 and the 4XL. So while we’ve been living with the Pixel 4 XL for a week, this review also stands up for the smaller device.

There are two big design changes to this year’s Pixels: the cameras (we’ll get to those soon) and the removal of the fingerprint sensor, which has sat on the phone’s rear since 2016. This cleans up the back of the phone, with only the camera bump sticking a couple of millimeters above the smooth, glass, surface. (Although, how the back of the phone looks probably doesn’t matter too much if you’re being sensible and putting it straight in a case).

The bigger loss is the functionality of the fingerprint sensor. For the first time, Google has introduced facial unlocking to the phone. After adding a ‘profile’ of your face by carefully rotating your head at the front facing camera, the unlocking system is quick to operate.

Pick up the Pixel, hold it in front of your face – frustratingly, unlike with the iPhone, you have to be right in front of the phone, not slightly to the side or at an angle – and it will almost instantly unlock. It’s quick, responsive and convenient.

However, Google messed up big time with the facial-recognition feature. Unlike Apple, it hasn’t included a alertness setting that activates the system when you’re looking at the camera. It will work if your eyes are shut.

This means anyone who waves a Pixel 4 near your face can get into the phone – including, rogue law enforcement officials. Google has been forced to backtrack on this, saying a software update will add an attentiveness mode in the coming months. But, for a company that’s making a lot of noise about its privacy efforts it was a massive misstep.

Keeping the fingerprint sensor would have been ideal, but it’s likely that Google doesn’t have the hardware capabilities to embed one under the screen yet. (Some Samsung, Huawei, OnePlus and Nokia devices all have the technology.)

Elsewhere, the front of the Pixel has subtly changed. The phone’s notch, which on the Pixel 3 contained two cameras, has been abandoned. Instead there’s a slightly larger bezel at the top of the phone than exists on its side, giving room for the 8MP, ƒ/2.0 aperture, camera and Google’s all-new radar sensor.

Five years of development has gone into Google’s biggest addition to the Pixel 4, the company says. Its radar system – officially dubbed Motion Sense – sits above the phone’s display and is intended as a gesture interface. It detects when your hand is above phone and responds to your movements.

But at this stage, it doesn’t really do a lot. When playing music, through Spotify for instance, you can skip to the next song by waving your hand from left to right. (The phone doesn’t have a headphone jack.) You can silence alarms and call through the same gesture. When it works – it can be intermittent – the feature is neat. It’s a use case that is intuitive and natural, but not something anyone really needs.

There’s definite potential here, but we would like to see the radar chip have a deeper range (at the moment it seems to work with your hand about 10-15cm above the screen) and installed in Google’s smart devices. A smart display with gesture control makes complete sense.

As much as Google wants us to focus on the new facial recognition and radar hardware, it’s impossible to ignore the cameras. The Pixel has been about the camera since day one.

This time around, the company has added a second lens for the first time, following the general industry trend. There’s a 16MP camera with ƒ/2.4 aperture and a second telephoto lens that’s 12.2MP with a ƒ/1.7 aperture.

As is typical with the Pixel, the camera setup is fantastic. Images are clear, crisp and the new telephoto lens lets you zoom more than ever before in Google’s phone range. The night mode is one of the best out there.

The quality of images is more than good enough for whatever you want to do with your photos. (Let’s face it, you’re probably going to post them to Instagram and then forget about them.)

While the second camera does mean you can zoom in on practically everything, Google has missed a trick by not copying its rivals, including the iPhone 11 and 11 Pro. It hasn’t added a wide-angle lens. The previous wide-angle selfie camera on the front of the Pixel 3, which has now been removed, worked well. The Pixel 4 would have benefitted with a third rear camera.

For the first time in four years, Google has acknowledged the Pixel’s internal specs need a bump. It has boosted RAM from 4GB to 6GB. The big performance issue is the phone’s battery. The XL has a 3,700mAh battery and the smaller 4 comes with 2,800mAh battery.

As it stands, the battery will get you through a whole day, but it often feels touch and go to whether it’s going to make it. On heavy days of phone use, I’ve been hitting the 30 per cent mark at around 7PM each evening. The remaining juice is enough to get you through toned time, but being that low does make you feel uneasy – especially when it could be avoided with a slightly bigger battery.

Mobile operating systems – Android and iOS – don’t usually feature in our reviews. There’s a simple reason for this: they’re available across all phones, whether you’ve spent £1,000 plus on a flagship or bagged a budget phone. However, things are a little different with Google’s Pixel devices.

The Pixels come with a couple of Android advantages. Each year the phones launch with the latest version of the OS (this year Android 10). As is typical with Pixels, the Android skin is incredibly minimal and one of the most user friendly experiences that’s out there. There’s no bloatware (unless you consider Google’s own apps to fall into this category).

Part of the apps bundled within the Android installation on Pixels include Google’s new Recorder. It’s a voice recorder with an AI-infused twist – it will transcribe your conversations in real time.

Recommended!  How To Free More Memory Space on Your Android Smartphone [Proven Ways]

All of the machine learning that detects and deciphers words is done on the phone, using its Neural Core chip. If we’re honest, the feature – which works incredibly well, but doesn’t separate individual voices at present – is most exciting for journalists and people taking meeting minutes.

But more importantly, Pixels tend to get Google’s security updates and patches faster than other phones. This matters when 12 months after Android Pie’s release only 22 per cent of Android’s are using the most recent version. Google is turning Android into a security advantage for its own phones.

The Pixel 4 is a very good phone. It’s fast, contains the purest form of Android available, has a mighty impressive camera and Google’s design department has got its form factor right. Sure it may not have the highest specs of flagship phones in the market, but it is up there with some of the best phones you can buy.

But is it a huge step forward for the Pixel? In reality, probably not. There’s not a large amount of new must-have features when compared to the newest Google phone, the budget-friendly Pixel 3a.

The dual camera addition helps Google keep knocking competitors back in the camera department (that’s also thanks to Google’s AI powers), but a wide-angle lens would have been an ideal cherry on the cake. The phone’s battery life causes a level of nervous anxiety that wasn’t needed and crucially hadn’t been present in previous Pixels.

If you want one of the best Android phones around, sure, buy the Pixel. It won’t do you wrong and you’ll be wondering why more people don’t have the phone. But, just be aware that you can get a lot more features for your money if you go elsewhere – the OnePlus 7T is just one example: more than £100 cheaper, has greater storage as default and minimal Android bloat.

Previous post How to take screenshots on your Mac, Windows PC, iPhone and Android