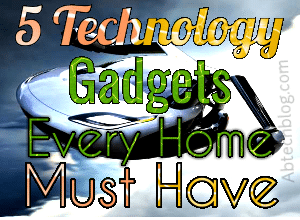 Besides smartphones, what should a modern man or woman own in the year 2018? Here are four other essential pieces of technology.

More and more tech products are having a profound impact on the way we live our lives.

But with so many gadgets on the market, which ones do you really need to own? Here are five we rate as essential in the year 2018.

1. A smartphone of your choosing
Smartphones are the most personal, powerful devices we have right now. They’re tiny computers that fit in our pockets.

But despite the sheer number of phones that exist in 2018, choosing the one for you usually boils down to one question: “iOS or Android?”

Many people will tell you Apple provides the most reliable smartphone experience with the best security and the fastest updates. Others prefer the openness of Android, which gives users more control over how their phones work and give them more options for customizing their devices. Android phones also come in a wider variety of designs.

Whichever system you pick, you’ll have plenty of excellent options to choose from, in terms of devices:

For iOS fans
Apple now sells phones in a range of sizes, prices and capabilities, from the $350 iPhone SE to the $1,000 iPhone X. You can learn more about every iPhone now available right here.

For Android fans
On the Android side, the top phones are the Pixel gadgets from the operating system’s designer, Google itself. The Pixel 2 and Pixel 2 XL are the search giant’s newest phones, and they’re incredible devices. They use artificial intelligence in various clever ways, from passively telling you what music is playing in the background to making your photos look better.

Most critics love the Pixel devices, but you have plenty of other gorgeous-looking Android phones to choose from. The Essential Phone, Samsung’s Galaxy Note 8 and Galaxy S8, the first-generation Razer Phone, and the OnePlus 5T are all standout devices. You can check out our list of top smartphones here.

When Amazon released the Echo three years ago, it became the first company to offer a great product that married a smart voice-assistant with a smart home device. Since then, lots of other tech companies and appliance makers have been trying to follow its lead. Google has come the closest with its Home family of Google Assistant-powered smart speakers: the Google Home Mini, the Google Home, and the Google Home Max.

Apple’s HomePod, which will be powered by its Siri voice assistant, won’t come out until sometime later this year after the company initially promised it would arrive by last holiday season. So right now, if you want a top-notch smart speaker, the decision basically comes down to Amazon or Google. Which company do you feel more comfortable letting into your home?

For me, the answer here is the Amazon Echo, because it’s simple, beautiful, easy to use, and extremely useful. The Echo can hear you from one room to another, thanks to its seven Omni-directional microphones, and can respond to you quickly and naturally.

And the Echo can do all sorts of amazing things, such as call an Uber for you or read you the day’s news. But it’s great at the simple stuff, including setting cooking timers and playing music.

Having owned an Echo for two years now, I honestly can’t imagine life without it.

The $300 Nintendo Switch has been on the market for less than a year, but it’s already gotten off to an incredible start, becoming the fastest-selling video-game console in US history.

The Switch offers some simple but compelling propositions: Play games on your TV or on the go. Play by yourself or with friends. Compete in your living room or over the internet.

I’m pleased to say the game machine is even better in practice than it is in concept. Being able to play console-quality games on a handheld device that you can take with you wherever you go is a profound advance in the world of video games. It will change your expectations for what a video-game console should do and what it should be.

Most importantly, the Switch proves that nobody makes better video games than the master game maker itself, Nintendo.

“Zelda: Breath of the Wild,” which launched with the console, is one of the best games ever created — it even brought my fiancée and me closer together. The other big Switch game from last year, “Super Mario Odyssey,” is perhaps the best Mario game ever made, which is saying quite a lot, considering the franchise’s incredible history.

With so many great-looking games on the horizon, the Switch is an absolute must-have gadget in 2018.

Yes, there is already a game console on this list, but the PlayStation 4 is the world’s most popular video game console for a reason: It can do so much more than just play games.

Even in 2018, it’s still incredibly useful to have a device that can play CDs and DVDs. Not only can the PlayStation 4 do both, but it can also play media files you’ve saved to external drives.

But that’s just scratching the surface of its media playing capabilities. The PlayStation 4 is also a media centre in its own right, with the ability to stream video from apps including Netflix, HBO, and Hulu, as well as from PlayStation Vue, Sony’s own live-TV subscription service. It will also allow you to listen to songs on one of your Spotify playlists while you’re playing your favourite game.

Of course, the PlayStation 4 is also a great game machine. You’ll find an incredible library for it of amazing games that aren’t available for any other console, including “Bloodborne,” “Horizon Zero Dawn,” and “Uncharted 4.” And there are more such exclusives coming this year, including “God of War” and “Spider-Man.”

The Switch may be the most innovative game console, but when it comes to offering blockbuster games and incredible visual experiences, the PlayStation 4 is still king.

The AirPods might look a little goofy when you wear them, but they are easily the best pair of wireless earbuds you can buy right now. And they might even be my favourite wireless headphones, period. Indeed, the AirPods might be Apple’s best invention since the iPhone.

Among the many great things about them is they are incredibly easy to use. They come in an adorable white carrying case that looks like a slick pack of dental floss. As soon as you open it, the buds automatically pair to your phone. Setup is really that simple.

Once you’ve paired the AirPods to your phone for the first time, you can quickly pair them with any other Apple device you own, from your MacBook to your Apple TV.

Of course, all this slick technology wouldn’t matter if the AirPods didn’t sound good. But I love the way they sound, and I think most other people will too.

Some audiophiles may nitpick, but I’ve reviewed dozens of headphones, and I have zero complaints about how the AirPods sound. In fact, I use my AirPods for almost every single phone call because I can hear people better when I’m wearing them.

You’ll find other excellent wireless headphones out there, but to me, the AirPods offer the most futuristic feeling you can get in 2018. When you wear them, you tend to forget you’re wearing anything in your ears at all. They’re that magical.

Next post Top 4 Tips to Excel in Mobile Application Development