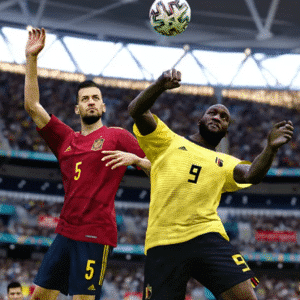 Kudos, Konami. While most sports publishers raced to have their annual games available for the launch of PS5 and Xbox Series X, the Japanese powerhouse took a step back. PES 2021 on last-gen was marketed as a simple roster update, yet a series of patches made it so much more. As a result, PES 2022 has been the company’s focus for at least 18 months. What does this mean in terms of an official PES 2022 release date, new gameplay features, and so on? GR’s PES 2022 guide, which will be updated throughout the coming year, has the scouting report.

Historically Konami has sought to pre-empt mammoth FIFA sales by bringing its game out a fortnight ahead of its big-bucks rival. PES 2018 landed on 15 September 2017, PES 2019 on 30 August 2018, and PES 2020 on 10 September 2019. With the series launching on next-gen, it’s paramount that the new game drops before FIFA 22, which GR expects to arrive at the very end of September. So we’re predicting a PES 2022 release date, with much social media fanfare, of the second week in September.

While some companies have shied away from E3 in recent times, Konami has strong ties to the show of the summer – with key Metal Gear Solid and PES behind-closed-doors previews occurring in Los Angeles over the years. E3 2021 is set to be a digital-only event due to the pandemic, but should the show go ahead on 15-17 June as predicted, it’s still the logical time to unveil the first gameplay footage of PES 2022. Otherwise, further momentum will be lost to its longstanding rival, with FIFA 22 certain to be revealed at EA Play Live during the same month.

Not a lot. In fact, the Japanese publisher’s wall of silence since autumn 2020 has sections of the community worried. For the record, here’s the official line on PES 2022:

“As the industry stands at the precipice of an exciting new generation of consoles, we believe that now is the perfect time to share some of our plans for the future of the PES franchise with you,” Konami said in a blog post ahead of PES 2021. “To that end, we are excited to announce that we are hard at work on a next-generation football title that aims to truly embody our core concept of the ‘The Pitch Is Ours.'”

“This title is being developed with an updated engine that will enable us to dazzle you with staggering improvements to all areas of the game. Expect more realistic player models and animations, enhanced physics, photorealistic visuals, and much much more.”

Yes! Bidding goodbye to Pro Evo’s Fox Engine era, Konami is switching to Unreal Engine in order to build PES 2022. “Our development team in Japan tried it out, and they’ve seen they have so much more opportunity to do different things on the pitch when it comes down to gameplay visual effects,” Lennart Bobzien, European brand manager, confirmed to Eurogamer. “When they played around with the Unreal engine, they just decided this was the engine they wanted to use to make the step into the next console generation. The Unreal engine is the base for the future of the PES series.”

With gameplay details scarce, speculation as to how PES 2022 might look and play has been left to fans. Thankfully, the series’ esteemed history – it was considered the best footy sim of the PS2 era by a considerable margin – has kept the community strong.

Pinky1337 on Reddit lists a catalogue of specific, strong ideas, many of which should appeal to long-standing fans who want their chosen football series freshened up, and trigger intrigue from those weary of FIFA. “Heavily improve offensive AI,” he writes. “Strikers starting runs behind the defence in situations where my player is unable to pass are infuriating. Both on offence and defence, AI-controlled players need to react better to the ball. [Also] remake a lot of animations. Especially celebrations and goalkeepers. [There’s] so much stiff movement that is just ugly to look at.”

Aesthetics are a recurring theme. “Better facial animations,” he continues. “Have some fun with camera angles. It’s a video game [with] so much possibility. A PES 2017 trailer [featured a] celebration where the camera panned down to head height, and it looked like you ran along with the players. That would be awesome. Players without a real face need to look way better [too]. 2K is a great example of how to do it right.”

This Twitter wishlist from @Rasheed1981 also feels straightforward yet achievable:

As for long-haul play, Master League is a major focus. Long before anyone had heard of Ultimate Team, it was the bedrock of PES’ halcyon days as you took a team of also-runs and gradually upgraded it with real players. Local co-op play for this marquee mode is seen as one way of bringing it back to the future.

“One of the most enjoyable moments of the entire console generation was when the penny dropped and I realised, through share play, I could play a Master League tournament with my brother,” writes John Blaze at Evo-web. “When we lived together, this was something we would do in previous games and it was fun building a team and genuinely struggling to do so.”

“Playing through Share Play works well, but the graphical quality for the person not hosting is not the best, there is often lag and button press delay… I just don’t understand how [local co-op] has been missed. This should essentially be the case with every game. Minor tweaks to gameplay and improved graphics are great but I just want gaming to return to a time where there was a genuine focus on fun.”

Next post How Does Bitcoin Mining Work? Mine Bitcoin and Dogecoin with Phone free

This Apple Watch clone is surprisingly good for just $22.54