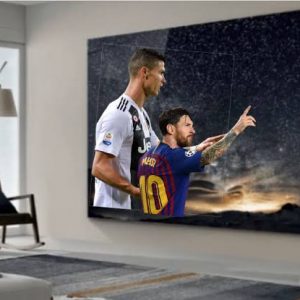 Samsung showed off a massive 219 inches TV -that’s more than 18 feet – at the CES technology show in Las Vegas.

The TV is called “the wall.” It uses a technology called micro LED – which creates a brighter image using less energy than current televisions.

For those of you who think a screen like this is better suited to a stadium than a living room, a 75 inch modular version is also coming out.

You can either watch that by itself or buy additional screens to snap together and make a bigger one.

Sony, TCL, and Hi-sense are also showing TVs 75 inches and larger at the show.

What do you think about the largest Samsung television?

Where will it be best suitable?