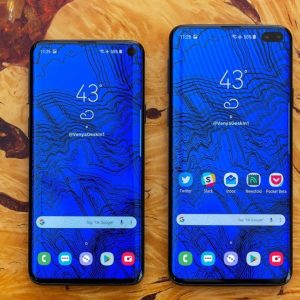 Samsung’s Galaxy S phones always give us something exciting to look forward to at the beginning of each year, and 2019 officially marks the 10-year anniversary of when the first Galaxy S flagship was released.

Similar to what Apple did with the iPhone X, we’re expecting the Galaxy S10 to be truly special. The Galaxy S9  and S8 were both excellent phones, but in honor of such a big anniversary, Samsung will likely pull out all the stops to release a truly special and jaw-dropping gadget.

If you’re ready to learn more about the Galaxy S10 and find out what we could look forward to next February, here’s everything you need to know.

Just a few short days ago, new renders appeared to give us a closer look as to what we can likely expect from the Galaxy S10 and S10+. Today, another render has popped up — this time providing a glimpse of the lower-end Galaxy S10 Lite.

Recommended!  WhatsApp will stop working on these phones soon: Check if yours is among the list

This latest render comes courtesy of Samsung tipster Ice Universe and reveals a phone that looks very similar to the regular S10. There’s a camera hole-punch cutout at the far right corner, and while the bezels surrounding the display are very thin, they do appear to be slighter thicker than the S10 and S10+.

There’s still no word as to how competitive Samsung’s going to get with the S10 Lite’s pricing, but if we can get a phone of this caliber around the $500 range, we could be in for something mighty special.

We’re still a few months away from an S10 reveal at Mobile World Congress, but rumors and leaks are now turning into concept renders. And while these from Ben Geskin are certainly problematic and theoretical, they’re an interesting look at what the front and back of the new phones could look like.

Indeed, it’s interesting that in avoiding the notch and introducing a “hole punch” in the screen to accommodate the front-facing cameras, Samsung’s so-called “Infinity-O” displays could be among the more controversial designs of 2019.

While there’s nothing definitive in these renders to say that they’ll turn out to be what the S10 series looks like, it’s clear that Samsung’s status quo is disappearing and that it, too, will move towards a more modern, full-screen design in 2019.

All the important details

How many versions is Samsung going to launch?

For the past four years, Samsung’s typically launched two models of its Galaxy S series:

With the Galaxy S10 in 2019, Samsung is expected to shake-up its formula by releasing as many as four different models — codenamed Beyond 1, Beyond 2, Beyond 3, and Beyond X.

Beyond 1 and Beyond 2 will be similar to older S flagships with the former having a flat screen while the other has Samsung’s iconic curved display. Beyond 3 is where Samsung’s putting all the marbles, with things like a larger screen and triple camera system on the back.

Beyond X is expected to come out a few months after the first three phones and act as a special edition smartphone in honor of the 10-year anniversary of Samsung’s Galaxy S lineup. Rumored specs for it inlcude a 6.7-inch display, a total of six cameras, and support for 5G data speeds.

When will the Galaxy S10 be released?

Perhaps the biggest question on your mind is “When will I be able to buy the Galaxy S10?”.

Save for the Galaxy S8 that was announced at its own special event, Samsung usually unveils its Galaxy S flagship phones during Mobile World Congress each year.

MWC 2019 is scheduled to take place between February 25 and 28 in Barcelona, and there’s a good chance that’s where we’ll get our first look at the S10. To back up this thought, reliable leaker Ice Universe said on July 5 that the S10 will be unveiled at MWC — just a month before the Galaxy X. On November 20, The Wall Street Journal also confirmed that Beyond 1, 2, and 3 will be revealed at some point in February.

As for when you’ll be able to purchase the S10, it should officially launch around two or three weeks from when it’s announced. Should Samsung decide to reveal the phone during MWC, that’d place it with a launch date of around early-March.

How much will the S10 cost?

When it comes to price, that’s where things could get interesting next year.

Samsung’s only ever released one or two variants of its S flagships at a time, such as the S7/S7 Edge, S8/S8 Plus, etc. However, as noted above, the Galaxy S10 series will likely consist of three different phones.

This could result in vastly different pricing across all models, and depending on how you look at things, that’s either a dream come true or a nightmare.