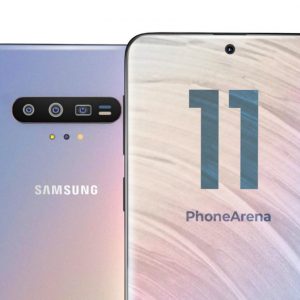 The rumours and speculations surrounding the Samsung Galaxy S11 are reaching it’s climax. Even the flagship handsets of the past, didn’t gather such internet buzz the S11 has generated, and it’s a testament to how excited people are about Samsung’s latest.

The most recent leak reveals a mysterious tidbit of info based on a recently-granted trademark.

Who spotted the Samsung Galaxy S11?

The Samsung Galaxy S11 was spotted by Dutch news outlet LetsGoDigital, Samsung has filed a trademark for the name “SAMOLED” via the Korean Intellectual Property Office.

That’s not a lot to go on. One easy theory is that the name refers to a Super AMOLED display that’s already very popular in smart devices today.

A Super AMOLED display is an AMOLED screen (Active Matrix Organic Light Emitting Diodes) which has incorporated a touch-sensitive layer into its structure.

Previously, touch-sensitive layers sat on top of the screen rather than incorporating it into the glass, creating a thicker surface.

It could be Samsung’s unique name for a slightly adjusted or differently branded Super AMOLED screen, but it seems unlikely Samsung would attempt to trademark such a widely-distributed piece of hardware.

Could Samsung be preparing something bigger – for example, a new kind of screen technology? If so, what’s missing from the phone screens of its rivals, such as the Huawei P40 Pro? We’ll know for sure soon, as that “early 2020” launch date inches ever closer”.

We’ll share the launch date and specifications as soon as possible. Stay updated.

What do you think?

Next post Samsung Galaxy S11 will have 120Hz display option