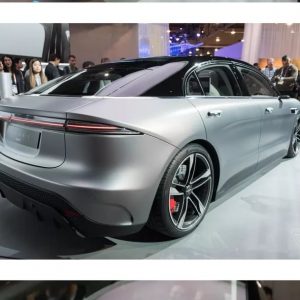 To answer your question: no, you won’t be able to buy the Sony car. Not any time soon, at least. The company has no plans to mass-produce the Vision-S, the car it surprise-announced at the end of its press conference at this year’s Consumer Electronics Show, nor does it plan to do a limited run.

Instead, the Sony Vision-S really exists somewhere between a concept and a prototype. Like a concept, it’s meant to showcase the ideas Sony has for the world of cars. But like a prototype, the car actually works.

There’s actually a long list of those ideas on display in the Vision-S. One of the big focal points is, unsurprisingly, the entertainment experience and user interface. That starts with a set of rectangular displays on the dashboard that stretch from pillar to pillar.

NO, YOU CAN’T BUY IT

Both the middle display and the one in front of the passenger seat are touchscreens. This is where the driver and passenger can access all of the car’s media controls.

That included things like — shocker! — Sony-owned movies or Sony-licensed music, but also a tab for games (which wasn’t working) and another for vehicle settings.

The animations of these menus were fluid, clever, and just overall excellent.

For instance, a quick L-swipe at the top left of the middle screen moved whatever was currently on display to the passenger screen — an interaction that felt deeply satisfying. There is also more than one way to interact with the user interface.

A separate trackpad extends out from the center console, and this can be used to tap through menus, and is capable of multitouch gestures. It’s also where the driver and passenger can change the car’s climate control settings. And below that was a big silver dial dedicated to volume control that could also serve other purposes.

It was a controlled demo, to be sure, but Sony deserves some credit for having the user interface piece of the experience feel so locked in. After all, it was less than two months ago that Ford totally blew this part of the Mustang Mach-E reveal. While it’s still hard to imagine cars with displays that span entire dashboards, I could see how Sony’s idea might be more practical than, say, the massive single screen of EV startup Byton.

Rear seat passengers aren’t left out of this experience, as they each have their own seatback touchscreens. And Sony outfitted the Vision-S with high-end sound equipment including speakers in each headrest, which the company says would make it possible for passengers to watch different things at the same time.

THE SOFTWARE WAS REALLY SLICK

Another idea that Sony infused in the Vision-S is that the company’s camera sensors could make useful components in cars, especially cars with advanced driver assistance features or perhaps even fully self-driving functionality.

The company is also using its image sensors to power the side-view cameras that take the place of traditional mirrors in the Vision-S. To that end, the Vision-S has more than 10 Sony image sensors embedded throughout the vehicle, alongside a host of other sensors like LIDARs, radars, and ultrasonics.

Sony could have just shoehorned bits of all this technology into a static concept vehicle. But the company figured the best way to prove to automakers and other industry players that it was serious was to fully embrace the challenge of building a working electric car.

“Through the process of building the prototype, we started to learn a lot about the architecture of the vehicle, we started to think about how our other technologies could be implemented in a vehicle,” Yuhei Yabe, the general manager of Sony Corporation’s AI and robotics business group, said in an interview.

That meant sourcing battery cells (Sony wouldn’t say where from) and packaging them together in what appears to be a fairly full-size battery pack. The company worked with automotive manufacturer Magna to help with the vehicle engineering work, and the result is a car with laudable specs for a first attempt.

It can go from 0 to 60 miles per hour in about 4.5 seconds thanks to two 200kW motors (one on each axle), and has a top speed of 149 miles per hour. The company didn’t cite a range figure, though the graphic in the cockpit showed 277 miles remaining with 82 percent battery. Sony says it imagines all these technological underpinnings could be used to power all sorts of vehicles, from SUVs to minivans to more utilitarian people movers.

It’s hard to explain how refreshing it is to see a company approach a concept car this way, especially at a show like CES. Automakers love to trot out what are basically rolling hunks of plastic and LED lighting. They’ll then saddle the glorified prop with their massive ambitions, even if the car might just fall to pieces if you breathe on it too hard.

Recommended!  Infinix Smart 5 ready to launch in India on February 11

Sony didn’t have to go and make a real car to show off some tech it thought might be good for the automotive space. But it did it anyway, and the car the company produced is remarkably coherent and downright attractive to boot.

Making cars at any scale is a grueling business, though. It takes a ton of work, and even more money. So it’s probably a good thing for Sony that it doesn’t plan to make the Vision-S — even if people wind up walking away from CES 2020 wanting a Sony car.

Photography by Sean O’Kane / The Verge