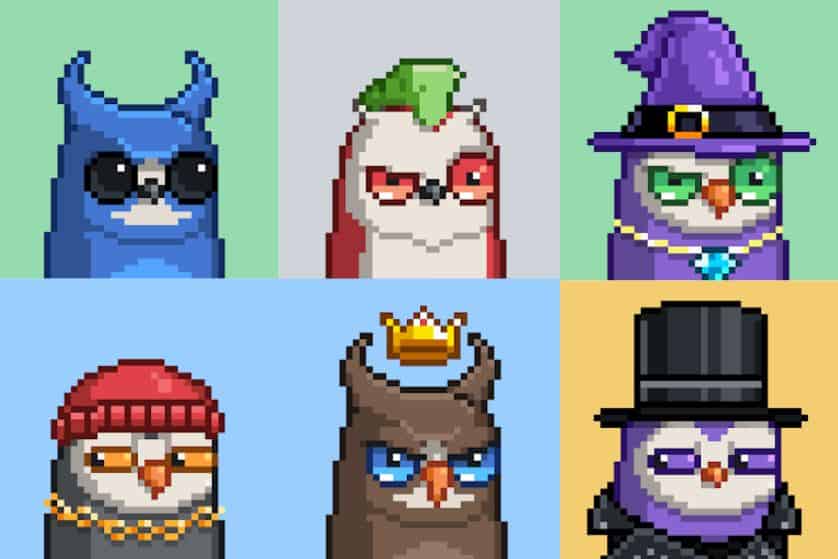 To many, 2021 was the year that saw tremendous growth in the popularity of non-fungible tokens and launched them into the mainstream.

And even though the overall volume of NFT sales declined in 2022, the hype is far from over. During this year, however, the trend seems to have shifted from a fragmented market to one where blue-chip and high-end projects take center stage.

And while some projects like the Bored Ape Yacht Club, CryptoPunks, Azuki, and others, continue to shadow a lot of the new arrivals, the Moonbirds NFT collection that launched in April 2022 caught the entire community’s attention.

What are Moonbirds NFTs?

Moonbirds are a collection of 10,000 non-fungible tokens issued under the ERC-721 standard on Ethereum’s network that took flight on April 16th, 2022.

According to the official website, Moonbirds NFTs represent “utility-enabled PFPs that feature a richly diverse and unique pool of rarity-powered traits.”

In essence, the project aims to become another blue-chip PFP initiative but has also added a lot of other perks to Moonbirds owners. Beyond this usability, each Moonbird is also built to unlock membership to a private club while attributing further benefits the longer users hold them. This last bit is called nesting.

For example, holding a Moonbird also provides access to an NFT-gated Discord server. Once inside, users will have access to private Moonbirds channels that offers information on upcoming drops, community events, nesting, and so forth.

The collection was minted at a price of 2.5 ETH each and also comes with 5% royalties on each secondary sale that go to the creators. Owners of Moonbirds also hold full intellectual property rights over them, according to the official website.

At the time of this writing, which is less than a week after the mint, the floor has surged to an astronomic 36 ETH (worth around $108K) in anticipation of the nesting functionality to unlock.

Beyond their pixelated design that has stood the test of time within the cryptocurrency community (see CryptoPunks), Moonbirds are built so that they can be locked up and nested without leaving the user’s wallet.

As soon as the Moonbird is nested, it will begin accruing further benefits, and as the total nested time stacks up, users will see their NFTs achieve new tier levels – hence, upgrading their nest.

At the time of this writing, nesting is not available, although the team has promised for it to happen in the timeliest manner possible.

Speaking of the team, let’s dig a bit deeper into the people behind Moonbirds. The organization responsible for the collection is called PROOF, and they are behind the PROOF Collective and Grails projects.

The organization was founded by Kevin Rose and Justin Mezzell, both well-known figures in the NFT world. After the mint, Rose posted a YouTube video, revealing that they plan to use the proceeds from the sale for turning PROOF into a renowned and reputable media company.

In any case, PROOF Collective is also a gated community that’s only accessible for those 1,000 people who own a PROOF Collective NFT, the current floor price for which sits at a whopping 140 ETH or around $420K at the time of this writing.

In essence, PROOF Collective is a private group of 1,000 NFT collectors and artists. Holding the PROOF Collective NFT comes with various benefits – one of which was the ability to mint two Moonbirds during the launch.

The Moonbirds NFTs Launch: Controversy and Beyond

As it is with every hyped launch, Moonbirds also came with some controversy. To unpack, it’s important to note how the collection was minted.

First, every holder of the PROOF Collective NFT (mentioned above) received guaranteed mints of two birds. This makes for a total of 2,000 Moonbird NFTs.

Second, 7,875 Moonbirds were allotted to those who won a raffle, and this is where some of the controversies come into place. Well-known cryptocurrency researcher Zachxbt revealed that some users took advantage of bots and created over 400 accounts to Sybil Attack the raffle. Many in the community argued that there’s no reason for this not to happen, although it surely left a sour taste for fair users who were unable to mint because of this.

In any case, the last 125 birds were reserved for distribution by the team.

Why Do People Buy Moonbirds?

It goes without saying that Moonbirds have been the hottest story in the NFT field for the past week. In the six days since they minted, the collection saw a total trading volume of more than 100,000 ETH, which is just short of $300 million, surpassing every other collection for the specific time period by a long shot.

There seem to be multiple reasons behind the massive interest. Art is surely amongst them. Moonbirds carry unique traits, with some being rarer than others. This warranted a sale worth 265 ETH for the following Moonbird NFT:

Their interesting design, coupled with the reputation of PROOF Collective and the massive attention the project garnered before the mint, resulted in tremendous hype around it, which in turn creates further catalysts for Moonbirds’ price.

How to Buy Moonbirds NFTs on OpenSea?

Buying Moonbirds NFTs on OpenSea is just as straightforward as buying any other NFT on the platform. To do so, you need to find the collection – this is the only official OpenSea link.

Once there, you would need to connect a Web3 wallet where the most popular choices are MetaMask and Coinbase Wallet.

Once you have your wallet connected, you need to get some ETH or WETH (Wrapped Ether). The Coinbase Wallet has an in-built fiat-to-crypto on-ramp, which makes it easy to buy crypto. MetaMask has similar functionalities.

From there, you just need to navigate to the Moonbird NFT of choice and hit the buy button. Selling follows a very similar process, but if you want to learn how to buy and sell NFTs on OpenSea and everything there is to know about the process – don’t hesitate to check out our in-depth guide on the matter.

Next post Crypto Investors Lost an Average of $79.5 Million Each Week in April