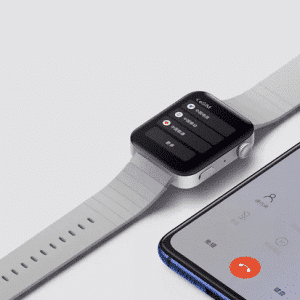 Xiaomi has officially unleashed the Mi Watch: an Apple Watch lookalike that runs a skinned version of Google Wear OS with prices starting at $185 (CNY 1,299).

We first saw a glimpse of the Mi Watch last week when we noted its physical similarities to Apple’s smartwatch. There’s a curved rectangular touchscreen, a knurled crown for scrolling, and a pill-shaped button right below that — all the same as Apple’s device.

Xiaomi has now shared more details about the Mi Watch, and it does sound like a capable little competitor.

Engadget reports that it has a 1.78-inch AMOLED display with 326ppi pixel density and a 570mAh battery, which Xiaomi claims is good for 36 hours of use. It’s powered by a Qualcomm Snapdragon Wear 3100 processor and 1GB of RAM, and it comes with 8GB of internal storage.

The big differential (apart from the price) is Xiaomi’s custom software skin for Wear OS: MIUI For Watch. This looks like it gives Google’s OS a vaguely Apple-ish visual overhaul.

Xiaomi has created its own apps for the device, including lightweight versions of its Tasks, Recorder, and Notes apps, and MIUI For Watch will also have its own app store.

Rounding out the feature set are various health functions, which Xiaomi deployed to great effect in its cheap and popular Mi Smart Band.

According to TechRadar, these include a blood oxygen sensor, sleep and exercise tracking, and something called “body energy monitoring.” The Mi Watch is also apparently water resistant for swimming.

The bad news is that the smartwatch will only be on sale in China initially. The basic watch will be available for $185 (CNY 1,299) on November 11th, with a flashier version (with a stainless steel case and metal strap) coming later in the year for around $290 (CNY 1,999).

It’s possible that the Mi Watch will also launch in other countries in the months to come. Alongside the watch, Xiaomi also today unveiled the CC9 Pro with a 108-megapixel camera.