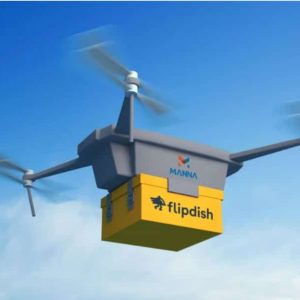 Manna, an Irish drone startup that — as its name suggests — sends food down from the heavens, has inked a deal with a Qualcomm-backed networking company to help its aircraft navigate the skies. The three-year deal with fellow Irish company Cubic Telecom will connect the drones with a 5G network connection so Manna can track and control its fleet, the companies plan to announce Thursday at CES.

Cubic offers a service spanning 180 countries to link cars and internet-of-things devices to mobile networks. The Manna deal will mean diners and restaurants can figure out where in the skies that spaghetti Bolognese is located and how long it’ll take before Manna’s autonomously piloted drone drops it at a customer’s house.

Startups and established giants like Amazon and Google hope drones will fill our skies to deliver packages, dinners and travelers, and some governments are working on drone regulations to let it happen.

There are plenty of obstacles to social acceptance — noise, privacy, and safety, for example — but drones could speed up some deliveries and that today happen with delivery cars, scooters and trucks.

“The risk is going to be hearts and minds. What does society think of what we’re doing with the airspace?” said Manna Chief Executive Bobby Healy in an exclusive interview. “I have no doubt they’re going to love it.”

Recommended!  How To Start Lucrative Watermelon Farming Business In Africa

It’s mostly a dream, but Manna has a foothold with test operations at Pontypool, Wales. It plans an expansion to three sites in Ireland and another in the UK by the third quarter of this year, Healy said. It also plans to extend to the United States this year “to show what we can do,” but for now Europe’s more accommodating regulations make it a higher priority.

Urban environments pack in lots of potential customers for deliveries and passenger flights, but Manna is focusing on suburban areas where landing zones are easier to come by.

Its custom-built drones, with an aviation industry approach emphasizing redundant components for safety, fly 200 to 300 feet above the ground at a speed of about 50mph, dropping off deliveries in a patch about 6 feet by 6 feet.

Manna surveys a delivery area ahead of time to plan operations, and uses computer vision to verify delivery zones. If there’s a problem, the drone returns to the restaurant.

“It’s really not going to be obtrusive,” Healy said. “You’ll hardly even notice what we’re doing.

The drones travel directly from restaurants to homes up to 4 miles away with packages weighing up to about 4 pounds. Packages are delivered as the drone hovers about 30 to 50 feet up.

Recommended!  How I Make $500 Weekly with DigitStem Affiliate Program

With three battery cassettes per drone — one in flight and the other two charging — a restaurant can keep a drone fully occupied with five deliveries per hour, he said.  A 3-minute delivery time will handily outpace most vehicles, Healy said.

For now, a two-person Manna crew operates the drones at a restaurant base station that has eight to 12 landing pads. Eventually, restaurants will be able to do it themselves.

One much bigger name in drone food delivery is Uber Eats, a business that’s growing faster than Uber’s original ride-hailing business, according to Eric Allison, leader of the Uber Elevate effort for delivering meals and passengers by air.

Healy believes Manna’s business is actually complementary, though. It focuses on delivery, leaving menus and ordering to others, like its partner Flipdish. That means Manna could even be a behind-the-scenes Uber Eats delivery partner, at least in principle. The company’s goal is to deliver meals at a cost to restaurants of about $1 per delivery.

It may not be more efficient than cooking for yourself, but compared to putting vehicles on the road, it’s an improvement, Healy said. “What we’re doing is an order of magnitude more efficient.”

Recommended!  Before Buying a Used Car: Ask This 5 Essential Questions