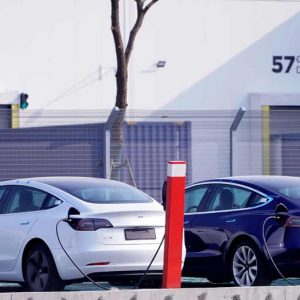 Global sales of electric cars accelerated fast in 2020, rising by 43% to more than 3m, despite overall car sales slumping by a fifth during the coronavirus pandemic.

Tesla was the brand selling the most electric cars, delivering almost 500,000, followed by Volkswagen. Sales of electric cars more than doubled in Europe, pushing the region past China as the world’s biggest market for them, according to data published on Tuesday by EV-volumes.com, a Sweden-based consultancy.

Sales of battery electric vehicles (BEVs) and plug-in hybrid electric vehicles (PHEVs) made up 4.2% of the global car market, up from 2.5% in 2019. The rising sales are being driven by government policies to reduce carbon emissions, but a key factor is that electric cars are simply a better technology, said Viktor Irle, sales and marketing analyst at EV-volumes.com.

Sales of electric cars did fall below 2019’s levels from March to June, at the height of the Covid-19 lockdowns, but recovered strongly after that and by December were at double the level in December 2019.

A series of governments have set dates for the end of sales of fossil fuel-powered cars in the next decade or so. “The political push is still there – [governments] everywhere speak about the green recovery,” said Irle.

“But the main reason for growth is simple – electric cars are a better technology. There is no noise, no pollution, better acceleration, and cheaper running costs. If people test-drive an electric car, they’re not going to go back to gasoline vehicles. The problem at the moment is that the price is a little bit higher, but the cost is really coming down as well.”

Irle said the surge in sales in Europe may in part be because carmakers had to meet EU emissions targets averaged across their fleets in 2020, and may have pushed sales of low-emission vehicles more than in 2019.

The relatively high purchase prices of today’s electric cars may have helped manufacturers weather the Covid-19 storm, Irle added: “The cheap car segments are always the worst hit [in recessions], because it’s not normally high-income people that buy those cars.”

Recommended!  Audi A4 2021 launched in India at N22 million Naira